Integrating Ideas with Others

In my draft, I completed my introduction providing general idea of a sponsor and how it can applied to the literacy narrative. I further explained about what will be stated later in the body paragraphs. I came up with solid evidences of my claims in the body paragraphs. This shows my introduction and explanations of evidence are mostly present.  In my conclusion, I challenged my idea stating the idea that sponsors might the be the most important factor in a literacy narrative and came up with an example of other narrative. In that narrative, sponsor did not take significant role and it was solely on the student who was responsible for the outcome. I made relationships between my idea and evidence and offered idea from a different view.  I suggested an idea that little and master narratives are related to each other. For example victim narrative may move to success or rebel narrative. I supported this idea with concrete evidence from Reading Rising Cairn. I also claimed that type of sponsors determine the characteristic of narratives. I supported this idea stating negative sponsors result in student’s victim narrative and provided actual example from the rising cairn.

(The idea that sponsors are the most important factor in a literacy narrative might not be fully justified. Sponsors are not doing everything and students take up a lot of responsibility as much as sponsors do. The literacy outcome is not solely dependent on the sponsors and students have to take some initiative. A student wrote a narrative about how she overcame the failure from the last semester through her change of mindset. She realized no one else but only herself could make an actual change of her life in school. Without any significant help of sponsors, she ended up being top of her class next semester. She overcame her anxiety, depression all by herself. Another example showing the importance of student’s role in a narrative is hero narratives. Students writing hero narratives focus on students individual and almost neglect the teacher’s influence on their outcomes)

Writing as a Recursive Process

My body paragraphs were added to strengthen my evidence. In my first body paragraph where I described about how negative sponsors can lead one to write rebel narrative had a confusing example. Dora in Brandt’s passage was more relevant to the victim narrative rather than to a rebel narrative. In my revised paper I divided the paragraphs into two, first paragraph was explaining how a quality of a sponsor limits the potential of an individual. Next paragraph I explained how that negative quality lead one to write victim narrative and came up with examples from Dora and Shaylee. By dividing the paragraph into two and choosing relevant examples strengthened my point. The length of my introduction grew after the revision. I explained more in depth of sponsor’s role, and what determines better quality of sponsors. I referred certain parts of passages from Brandt and Alexander to specify the concept of sponsor. I made it clear at last part of intro what I wanted to figure out through this paper. In my body paragraph where I explained how little and master narratives are related, I came up with more detailed situation of Shaylee and Shamus. I created my conclusion challenging my main idea that sponsor is the most important factor in a narrative. I suggested sponsors are not doing everything and students also take up some responsibility as much as sponsors do. 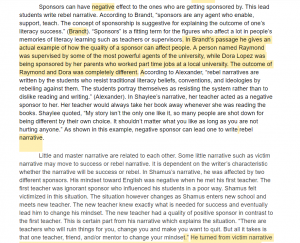 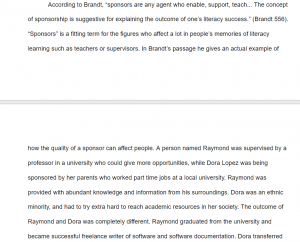 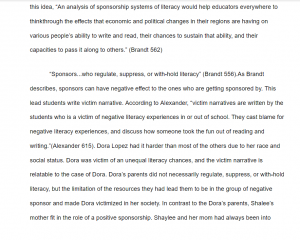 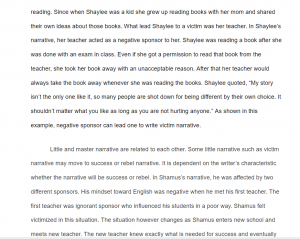 In one of my reading rising cairn discussion questions, (1/21/18) I related my own literacy experience to Shaylee’s narrative. Shaylee was put down for being different by others choices in school. Her book was taken away by her teacher even if she convinced the teacher it was not adult books. She was put down for a personal choice at other things too but she kept determined attitude toward what she believed was right. I had similar attitude with her and this made my choice admitted as another answer at a literature exam. At other assignments asking to connect Gee, Brandt, and Alexander I connected the trait of success narrative to the idea of Brandt’s sponsor. Sponsors are usually located at higher social status and they enable, support, teach literacy to the individuals. I drew relationships between parts or text in these assignments. At my annotation assignments I asked questions and begin to find relationships within texts and between texts. 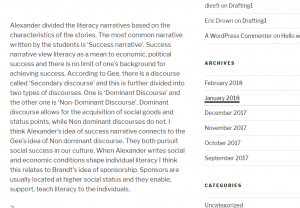 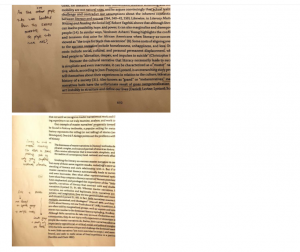 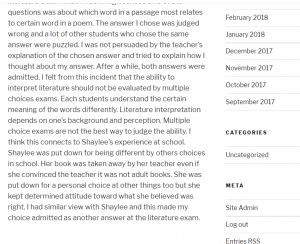 Critique Own Work & Others