I had no problem when I didn’t try to name each part I am drawing. I just focused on the shape itself and surrounding lines. Face was more successful than the hands. The features in the facial part were easier to catch than those in the hands. The relationships of lines in the hands were hard to grasp, and they looked like an abstract sketch. I first started to sketch the center of the drawing to make sure the final copy is not weighted toward one direction. Then I sketched the whole frame, dividing it into three parts. I worked on face drawing after that. At last I focused on shaping left hand which was the hardest part to draw. It seemed to have no relations with right hand so I had to draw my own lines to make it seem look alike with the original. I was fully concentrated with my work that I didn’t know how time flew. I was generally satisfied with my final work it is not one hundred percent same with the original but people will acknowledge that my sketch is the copy of Robert Muller. 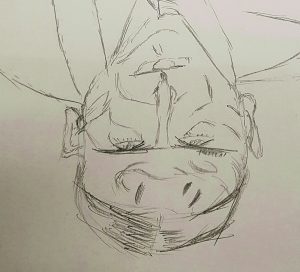 I tried to read the whole chapter all at once, but I could not get the topic when I first read it.  The characters and the things happening in the story were hard to catch.  I was also overwhelmed by the amount of the reading . When I read it for the second time, I could understand general topic and how the characters are related to each other. I didn’t have to read every word to catch the connection between the passages.

Rose is describing how it was like to be in the Vocational Education. He was accidentally put into the program by the school’s mistake. The program is for the students who are in lower level. He met different types of people in the class and majority of them were troublemakers. Rose however notes that some of them had special qualities. ‘I just wanna be average’ is a quote from Rose’s classmate, and Rose did not understand it while he had to switch from Vocational Education to College Prep. He was not sure whether or not he could do well on a regular school setting. He meets an English teacher called ‘Macfarland’ and he becomes Rose’s mentor. The teacher guide Rose into finding better himself and finally lead him to college. I think the lesson he wants the reader to know is the importance of finding someone who can help find one’s potential and have positive impact on his life. 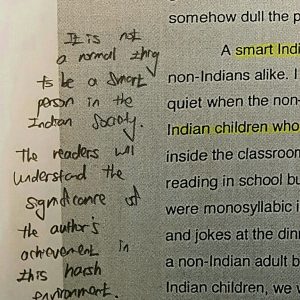 “I know,” I said, meaning both things: yes, most of it was good-okay anyway, serviceable-and yes, he had only taken out the bad parts, “I won’t do it again.” He laughed. “If that’s true, you will never have to work for a living. You can do this instead. Do I have to explain any of these marks?”

The author explained how he learned the meaning of writing a story. During high school, he created his own high school news paper, called ‘The Village Vomit’. This later lead the author to the most useful writing lesson he had ever got. He made fun of the teacher’s name on it and showed it to students in the school. Most of the teachers didn’t take it serious except for one.  She sent the author to detention and noticed front office of the school including the principal of his act. After this incident, the author was recommended as a sports reporter. The school thought it would be better to use the author’s writing ability to somewhere else.  A guy named “Gould” revised his writing, and told him about the meaning of the rewrite. The author offer us a lesson here, quoting Gould’s saying “When you rewrite, your main job is taking out all the things that are not the story, write with the doors closed, rewrite with the door open”. The author’s sense of humor made the “Village Vomit” and this eventually led him to realize the meaning of writing.

Sherman Alexie -Superman and Me-

“The words inside a paragraph worked together for a common purpose. They had some specific reason for being inside the same fence. This knowledge delighted me.”

The author describes the moment when he first caught the meaning of  “paragraph”. He was influenced by his father who brought a lot of books. While reading, he suddenly realized what ‘paragraph’ was. This explains how the author learned to read by himself. He regarded a part of Superman comic book as a three dimensional paragraph, and made up a sentence depicting the character’s movement. He pretended to read even if he could not. This was the beginning of his self learning how to read.

“A smart Indian is a dangerous person, widely feared and ridiculed by Indians and non-Indians alike”

At this part he mention how abnormal it is to be a smart person in the Indian society. Smart Indians are disrespected from other Indians and they are expected to fail in the Non-Indian world. The author refused to fail, and read books at everywhere he could. He was not a normal illiterate Indian.

“They look at me with bright eyes and arrogant wonder. They are trying to save their lives. ”

The author is emphasizing his position in front of the Indian students who are learning from him. He was never taught to write before, all the achievement he made is self taught. The lesson he is trying to convey is to live one’s life, reading and writing is inevitable. I think his achievement contributes to the Indian society. As people like him who could spread the importance of reading throughout the Indian society increases, young students will be eager to learn themselves. People who disrespect smart person will disappear, and this will eventually lead Indians save their lives.

I am David, and I am from South Korea. I spent few years after graduating from high school so I am 21. I traveled around the world to visit high school friends. Some people in my school go to college in Europe and America. One of them had same goal with me to become a dentist during the school years, and he recommended me to go to university in US. This is one of the reasons I came here. I also played soccer and violin since I was in elementary school. I hope I get better at writing through this class!

I completely agree with Dweck’s Growth Mindset about the power of ‘not yet.’ Dweck is suggesting if a student got a failing grade, it is better to give him ‘Not Yet’ instead of ‘Failure’. This will make the students more confident about the future possibility because ‘not yet’ gives sign that he could be developed. In the elementary school, teachers can praise the improvements the kids are making. This will make the students put more effort on the tasks and they will eventually deal with more difficult tasks successfully. When I was transferring to other high school, the students there had high academic achievement during their school years. The competition was tough among talented students. Even if I didn’t have instructors to lead me, I learned how to not give up even if the results were not good. I believed that I could do better later and made progress on my academic achievement. Later I was chosen as a student who made the most academic improvement in our grade. As Dweck says, fixed mindset does not help.  There are better results when I have a growth mindset.

Welcome to UNEPortfolios. This is your first post. Edit or delete it, then start blogging!